Tracking the Fall of Many Major Brick-and-Mortar Retailers

It is nearly impossible to walk through a shopping mall without seeing empty stores. Even some of the nation’s biggest retailers are closing brick-and-mortar locations by the hundreds. Watching these businesses crumble is scary, but it is not without benefit. Many retailers are downsizing in person locations while expanding online. This new direction will have many repercussions, both good and bad.

Investors who own and lease retail real estate will have to scramble in the face of fewer brick-and-mortar retailers. They may find the best use for their properties is no longer retail.

Job opportunities will also shift and many will be lost – positions at shopping centers in particular. Companies will not need as many positions to operate a storefront, since ecommerce orders require less manpower. Some personnel can be trained for new positions, but a majority will no longer be employed. Online retailers do create jobs, but so far not at the same rate that jobs are being lost as stores close.

A number of third-party services and products will also be lost in the transition from storefront to ecommerce. For example, retail companies will no longer need display case manufacturers, mannequin companies, window washers, sign companies, and retail janitorial companies.

Finally, communities can suffer when property taxes and other revenues are reduced or eliminated when a store closes.

Investors who specialize in warehouse space may see more demand as businesses shift to ecommerce sales. Even though these retail companies no longer operate a store doesn’t mean they do not need a place for their inventory and to process orders.

Ecommerce has its own employment needs which results in the addition of jobs. For example, Amazon announced in January 2017 that they will be adding 100,000 workers over the upcoming 18 months. Certain professions such as software developers and warehouse workers stand to gain the most.

Not all third-party services and products will suffer, and many will profit from the shift. For example, shipping companies, shipping materials, warehouse supply companies, and website development firms all stand to gain.

Finally, even though a community may lose out on revenue from a storefront, they may gain in the end when more warehouses and distribution centers are built. These facilities often do not have the same infrastructure requirements that a shopping mall would, which can lessen resource burden.

Throughout history our nation has survived and thrived as technology reshaped our world. For example, many jobs were lost when we went from horses to cars for transportation, but many new were created. Industry changes are inevitable. But in the case of the potential gains ecommerce brings to the table, a few darkened shopping centers may not be as tragic as it appears at first glance. 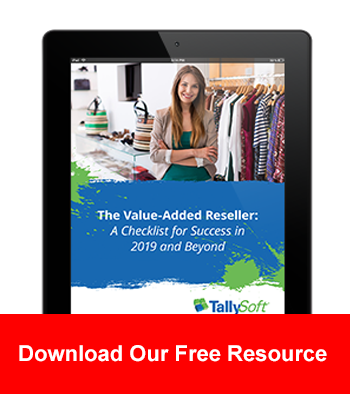 What Can You Expect from TallySales? Download our Complete POS Guide to TallySales Retail Management Suite